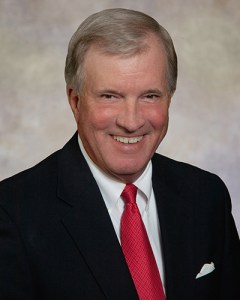 Dave, a 1971 graduate of The University of North Carolina at Charlotte, first joined Consolidated Planning in April of 1988. Following a long career in collegiate athletics administration, and intrigued by the work of the firm that was handling his personal financial planning, he decided to join the Consolidated Planning team as an account executive.

He spent the next seven years honing his skills as a planner and, in multiple years, qualified for The Guardian Life Insurance Company’s Leaders Club. His interest in and emphasis on the investment side of the business has proven to be pivotal in his career development. Following a three year sabbatical in the 1990s, during which time he served a Methodist Mission in the coalfields of West Virginia, he returned to Consolidated Planning in 1999 as the company’s manager of investment sales. During his management tenure, Consolidated Planning’s investment sales ranged from $60 – $100+ Million.

In January of 2003, Dave returned to private practice within the Consolidated Planning framework, teaming with Jeff Howard to design, build and monitor client investment portfolios. During their time together, Dave and Jeff have consistently placed nationally among the top producers within their broker/dealer. Dave holds the Chartered Financial Consultant® (ChFC®) designation and the Series 7, 63, 65, and 24 FINRA registrations.

Dave lives north of Charlotte in the Lake Norman area. He is also the proud dad of his namesake, David Ross, Jr., an award-winning photojournalist; a daughter Jessica, a professional hair stylist who shares her dad’s love of horseback riding; and of his son, Shane, a recent graduate of Lake Norman High School who is in the early stages of his professional work experience.

Check the background of this investment professional on FINRA’s BrokerCheck.

Phone: 704-552-8507 ext. 801
Toll Free: 800-532-2829 ext. 801
Fax: 704-554-6037
DTaylor@CPlanning.com
Securities products and services offered through Park Avenue Securities, LLC
(PAS), member FINRA, SIPC. OSJ: 4201 Congress St Ste 295 Charlotte, NC 28209 (704) 552--8507
PAS is an indirect, wholly-owned subsidiary of The Guardian Life Insurance
Company of America (Guardian), New York, NY.
Strategis is not an affiliate or subsidiary of PAS or Guardian.
Important Disclosures
Neither Guardian nor its subsidiaries issue Property & Casualty
or Health insurance products or services.
This material is intended for general public use. By providing this material,
Strategis is not undertaking to provide investment advice for any specific individual
or situation, or to otherwise act in a fiduciary capacity. Please contact a financial
professional for guidance and information specific to your individual situation.
2018-62656 (8/2020)